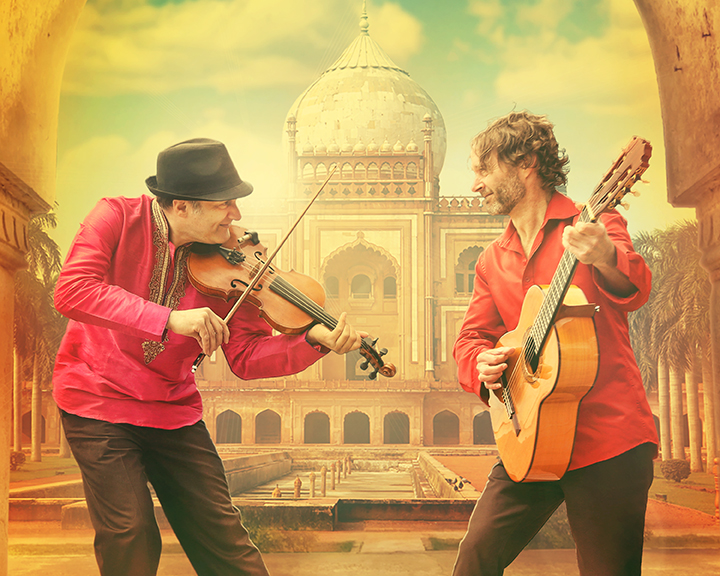 The songwriting, the sounds, the magic

Chris McKhool (violin) and Kevin Laliberté (guitar), the songwriters behind the music of Sultans of String, take you on a musical journey around the world!

McKhool met Laliberté just as the guitarist was coming off the road from touring around the world with Jesse Cook and cross Canada with The Chieftains. When McKhool (who has performed with Jesse Cook, Pavlo, Club Django) first heard guitarist Laliberté’s rumba rhythm their musical mind-meld created Sultans of String’s sound – the intimate and playful relationship between the violin and the flamenco guitar.  Acoustic strings meet with electronic wizardry to create layers and depth of sound, creating soundscapes that seem impossible to be coming from just two people.

Larger than the sum of its parts, this 3x JUNO Award nominated, 3x CFMA Award winning dynamic duo take you on a journey to hear the horses of Sable Island, underwater to hear the calls of Luna the Whale, and on the silk road through Spain and the Middle East, through the Gypsy-jazz cafés of Eastern Europe, and then back to Canada for a trip to the majestic Arctic.

“Thrill of improvising makes Sultans a thrill to experience… gripping suspense for both the audience and the musicians… Superb!” – Roger Levesque, Edmonton Journal

“Kevin and Chris are two extremely talented and creative musicians. Each of them have an extensive background in various traditions and numerous musical accomplishments to their credit. Their own compositions are … exciting and highly original. They are musicians and songwriters of the highest calibre!” – Ken Whiteley, Producer

“I remember the shiver up my spine on hearing the calls of Luna- the west coast killer whale searching for his pod- amazingly recreated on Chris’ electric violin. Haunting, moving and not to be missed!” – Charles McFarland, Artistic Producer, Centrepointe Theatre