Hi there! I hope you are all well :)   Please join us for this super cool Livestream we are presenting next Saturday Oct 16 at 7:00 pm EDT   Women of Song & Story

5 TALENTED WOMEN WITH INCREDIBLE SONGS TO SHARE – full bios below.
⠀⠀⠀⠀⠀⠀
★ Juno Award winner Kellylee Evans
★  America’s Got Talent star Mandy Harvey
★  Flamenco dancer Tamar Ilana
★  Ladino singer Yasmin Levy
★  Actor/singer Amanda Martinez
⠀⠀⠀⠀⠀⠀
In collaboration with Billboard charting band Sultans of String and Flato Markham Theatre!
⠀⠀⠀⠀⠀⠀
This is going to be so cool! Live performances, guest appearances, and video exclusives. This interactive concert will be held on Zoom and us Sultans get to play some new songs :)   The performance will last about an hour including a talk back portion.

Kellylee Evans
Known for her stunning crystalline voice that is both powerful and emotive,”Kellylee Evans is a stylistic connoisseur who has tackled everything from jazz to R&B and pop in such previous tasty classics as ‘fight or flight?’ and ‘Nina’, her Juno-winning tribute to the legendary Nina Simone. She recently released “Come On”, and comes on the heels of two nearly career-ending accidents: a freak lightning strike in her Ottawa kitchen and further effects of a concussion suffered during a fall at her home.

Mandy Harvey
Mandy Harvey is a singer/songwriter who happens to be deaf following an illness at the age of 18.  Mandy was Simon Cowell‘s “Golden Buzzer” pick on America’s Got Talent, who stated “Breathtaking… reminds of the first time I heard Adele sing”. She continues to perform around the United States and has been recently featured on NBC Nightly News, Katie Couric, Canada AM, and The Steve Harvey Show. In addition to performing and speaking, Mandy has become an ambassador to both No Barriers USA and Invisible Disabilities with a mission to encourage, inspire and assist others to break through their personal barriers.

Yasmin Levy
Yasmin Levy is an acclaimed Israeli artist known for her twist on Sephardic songs. The musical tradition came from her father, who recorded and preserved folk songs in Ladino, a Judeo-Spanish language that emerged in the territories of the ancient Ottoman Empire after Jews were exiled from Spain in 1492. Embarking on a 500-year-old musical journey, Yasmin takes Ladino to Andalusia and mixes it with flamenco, the style that still bears the musical memories of the old Moorish and Jewish-Spanish world with the sound of the Arab world – a ‘musical reconciliation’ of history.”

Amanda Martinez
Amanda Martinez is a singer/songwriter whose music exultingly blends her unique Mexican and South African roots with flamenco soul. Her solo CDs have garnered her multiple nominations for Latin Jazz Performer of the Year. Her third CD, Mañana, was helmed by GRAMMY-winning producer Javier Limón who hails Martinez as “one of the greatest voices in the world”. She recently released her fourth and much anticipated CD, Libre, and has headlined the legendary Blue Note, the FIFA World Cup Festivities in South Africa, and the PanAmerican Games in Guadalajara. Martinez is also an ambassador for SOS Children’s Villages.

MORE ABOUT SULTANS OF STRING
Sultans of String have been criss-crossing Canada, the US and UK for the last several years at many taste-making forums such as JUNOfest, NYC’s legendary Birdland and the Lincoln Center, and London’s Trafalgar Square. They recently sold out Koerner Hall (Toronto’s Carnegie Hall), and performed with Toronto, Vancouver, Edmonton, Stratford, Ontario and Niagara Symphony Orchestras, as well with Kingsfield POPS in Maine and Maryland’s Annapolis Symphony. Sultans of String were filmed by CBC’s Canada Live, MPBN’s Maine Arts! , and have performed live on BBC TV, BBC Radio, Irish National Radio, and the internationally syndicated shows WoodSongs, World Cafe, and on SiriusXM in Washington.

Today we continue Backstage, our new interview and music series with Sultans of String, on Facebook Live with two incredible artists, Tara and Ahmed Moneka!

At noon EST on we will launch the single and video we recorded together for our upcoming Sanctuary album, talk about music, and their journey to Canada from Iraq.
..
There are no actual tickets, simply join the Livestream at https://www.facebook.com/sultansofstring
.
https://www.facebook.com/events/1260607061049414
.
Much gratitude to Canada Council for the Arts | Conseil des arts du Canada for their support. 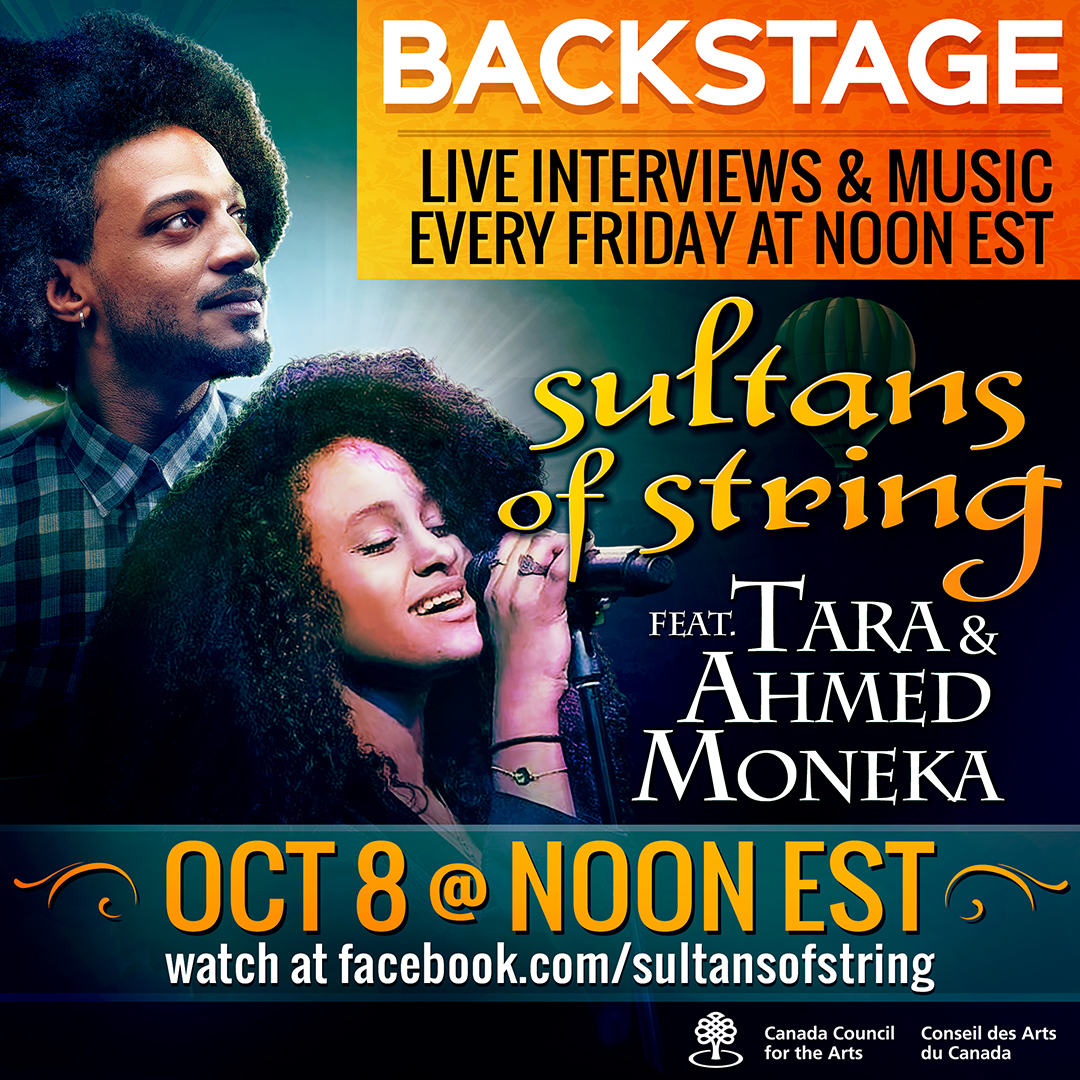