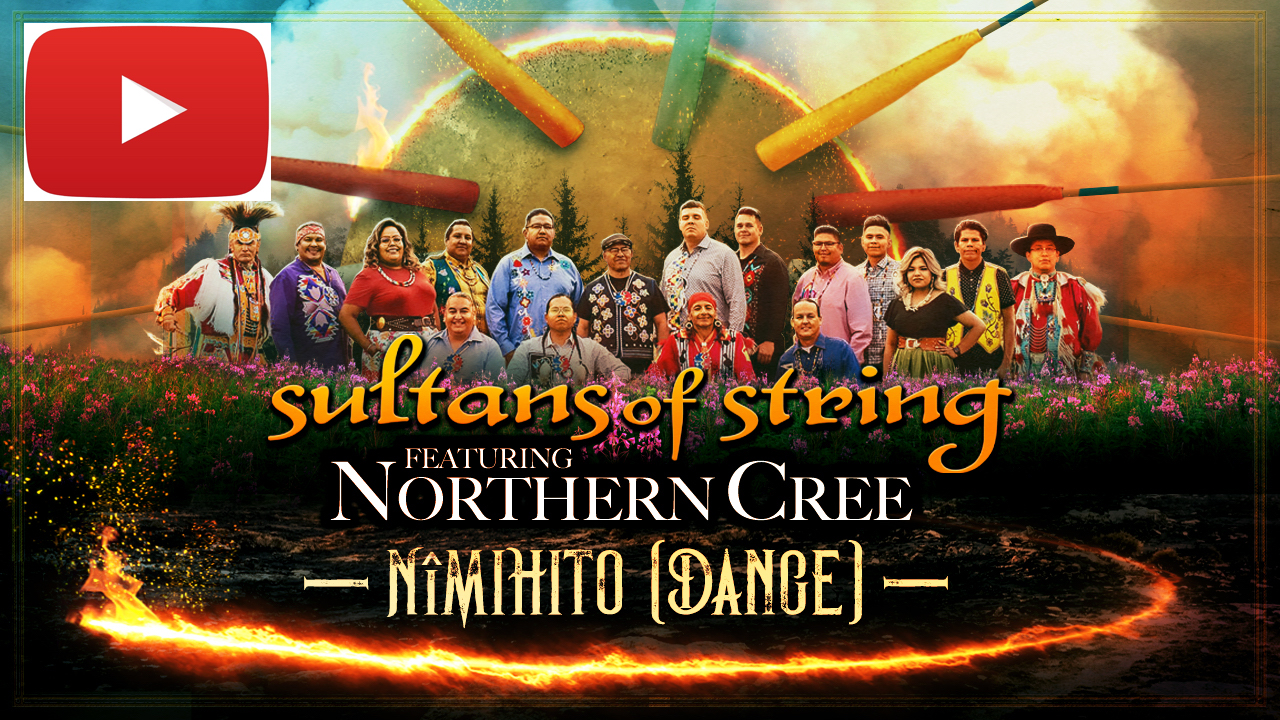 More info and pre-order full albums at this site https://igg.me/at/sultansCD

“Nîmihito (Dance)” is a collaboration between 3x JUNO nominated, 4x CFMA winning Sultans of String and Northern Cree, a nine-time Grammy nominated pow wow and round dance group from Treaty 6 territory in Canada, who have released more than 50 albums over their 40-year history. The video also features dancer Alicia Kewageshig, as well as City Of Prague Philharmonic Orchestra with arrangement by Ben Bolt-Martin!

It is the first single off the upcoming Sultans of String album entitled Walking Through the Fire (Sept 22, 2023 release), the most ambitious and important project of their career, a CD and concert of collaborations with First Nations, Metis, and Inuit artists across Turtle Island.

“We are creating this recording in the spirit of the Truth and Reconciliation Commission’s 94 Calls to Action, and Final Report that asks for Indigenous and non-Indigenous people to work together as an opportunity to show a path forward” says Sultans of String bandleader and violinist Chris McKhool, who was recently awarded the Dr. Duke Redbird Lifetime Achievement Award from the JAYU Festival For Human Rights x Arts.

Steve Wood from Northern Cree continues: “When you’re collaborating with mainstream music, it shows that we can work together to bring out the very best in who we are as human beings. And that’s what music does. It shows that we can work together and we can bring out something very beautiful. And it’s giving our music an opportunity for a different type of audience out there. There’s a lot of people that are just catching on to our type of music, which has been here since time immemorial. I think it’s great.”

The Cree lyrics, written by Leroy Woodstone, talk to the dancer about dancing and dancing hard and feeling the beat of the drum, encouraging the dancer to get down.

But there’s also an educational role in the song, says Steve: “A big, strong component of it is to teach our people and other First Nations people about the Cree language. It’s the very tip of who we are and of our ceremonies, pow wow is. It brings other people into our circle.”

The two groups met at Kettle and Stony Point’s Annual Pow Wow in the summer of ’22, where Steve shared that “The drum is also a very spiritual tool because when you look at the drum, somebody’s grandparent, mother, father, child gave its life for that head of the drum, because that was an animal, and is very much alive. Now, the rim is made from the tree. And we really look deep, the tree can teach us a lot because they’re alive. They can teach us about the relationships we have with everything around us and everyone else. And that person, those people that came to put that drum together, they had spirits, too. And they put their own spirit in the drum.”

“And that’s where all the energy comes from.” 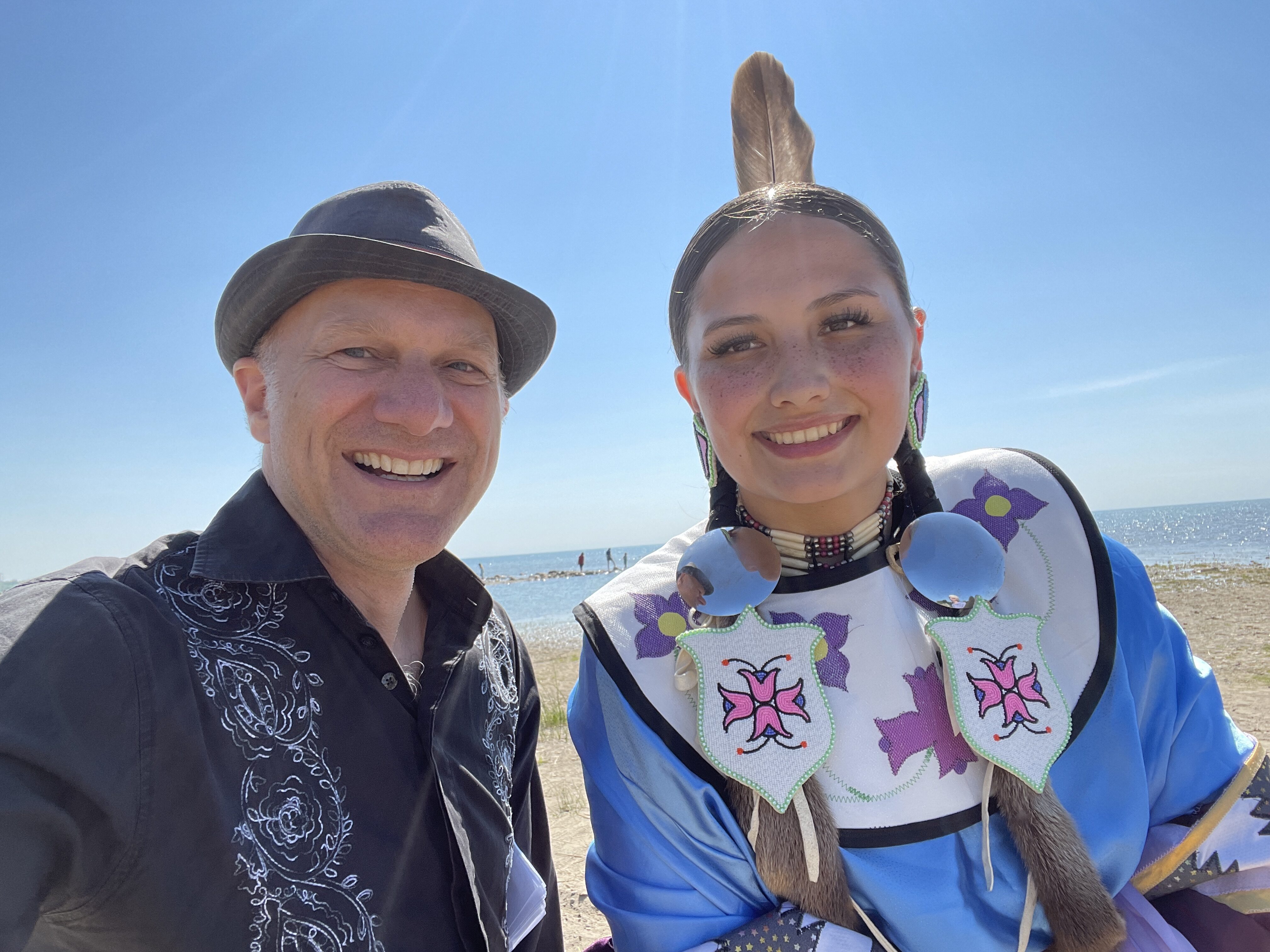 PHOTO: Chris with dancer Alicia Kewageshig who joined the group in their video shoot at the Kettle and Stony Point Pow Wow. Alicia is Ojibwe/Potawatomi from Stoney Point First Nation & Saugeen First Nation. She is 19 years old and currently a full time student at Western University.

Nîmihito (Dance) is the first single off our upcoming Sultans of String album entitled Walking Through the Fire, the most ambitious and important project of our career, a CD and concert of collaborations with First Nations, Metis, and Inuit artists across Turtle Island.

We are creating this recording concert in the spirit of the Truth and Reconciliation Commission’s 94 Calls to Action, and Final Report that asks for Indigenous and non-Indigenous people to work together as an opportunity to show a path forward. We know that as a society we can’t move ahead without acknowledging and reflecting on the past. Before reconciliation can occur, the full truth of the Indigenous experience in this country needs to be told, so we’ve been calling on Indigenous artists to share with us their stories, their experience, and their lives, so we settler Canadians can continue our learning about the history of residential schools, of genocide, and of inter-generational impacts of colonization.

For this project, we are working with an advisory circle of Indigenous artists including Chippewa/Anishinaaba Elder and poet collaborator Dr. Duke Redbird, who says

“The place that we have to start is with truth. Reconciliation will come sometime way in the future, perhaps, but right now, truth is where we need to begin the journey with each other. As human beings, we have to acquire that truth.”

Several other Indigenous musicians, designers and filmmakers are guiding us on this project, including designer Mark Rutledge working with ally Kurt Firla, and Indigenous filmmakers and videographers Eliza Knockwood and Marc Merilainen along with ally Micah Sky.

We also met with the Honourable Murray Sinclair, Ojibwe Elder and former chair of the Truth & Reconciliation Commission to speak about the project, who reflected;

WHO IS ON THE FULL ALBUM “WALKING THROUGH THE FIRE”?

We would like to acknowledge funding support from the Ontario Arts Council, an agency of the Government of Ontario, and Canada Council for the Arts.