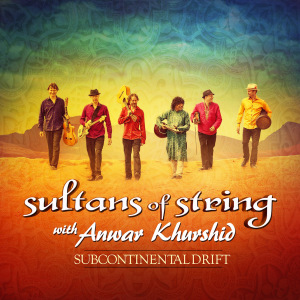 On the official ballot for the 59th Grammy Awards!

Filled with ragas, reels and rumbas, Subcontinental Drift is our fifth album as Sultans of String, and features a special guest musician, sitar master Anwar Khurshid (famous for playing on Oscar winning film Life of Pi, and The Love Guru).

There is something magical about joining world music rhythms with pop sensibilities and forms and lengths, and blending that with the music of the East. Yet, Subcontinental Drift is more than a genre-hopping passport. It is a musical promise that embraces differences while finding common ground across culture, land, and time. Anwar’s become a great musical and personal friend. Together we started writing songs about the freedom and equality we experience living here in Canada, and our hope of creating a better world. I feel in some way that these songs reflect our own personal journeys towards finding a world peace.

“Energetic and exciting music from a band with talent to burn!” – Maverick Magazine UK

“You get the feeling this is Strunz & Farah or Willie & Lobo or Gypsy Kings taken to the next level of the game, sometimes all at once… a sure bet to notch a JUNO and any other award winning hardware to come its way.” – Midwest Record, Chicago

“Transports listeners from one side of the globe to the other within one track. Truly the definition of music without borders. Whatever Sultans of String brings us next, we can be sure that it will test limits even more, and create even more musical magic. – Rating: Bad-Ass” – That Music Mag

“There’s something essentially Canadian about Subcontinental Drift with its swirl of influences from Cuba, France, India, Ireland, Lebanon, Pakistan, and Spain… Sultans of String succeed brilliantly…they’ve found the freedom to put all these worlds together, performing with a spirit of playfulness, openness, and warmth, that makes Subcontinental Drift such a beautiful surprise.” – Acoustic Guitar

“Subcontinental Drift is an enthralling, adventurous celebration of the power music has to transcend geographical and cultural boundaries, and Sultans of String wield that power with grace, eloquence and spirit.” – Folk Radio UK 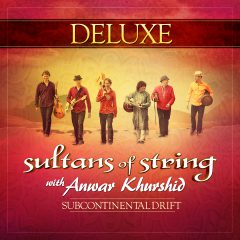