“Energetic and exciting music fest from a band with talent to burn… the very epitome of world music: no boundaries, no rules!” – Maverick Music Magazine*

“It seems that Sultans of String can’t get out of bed at the moment without finding themselves nominated for one award or another. In a word: Magnificent!” – Rock n Reel, UK (5 stars) 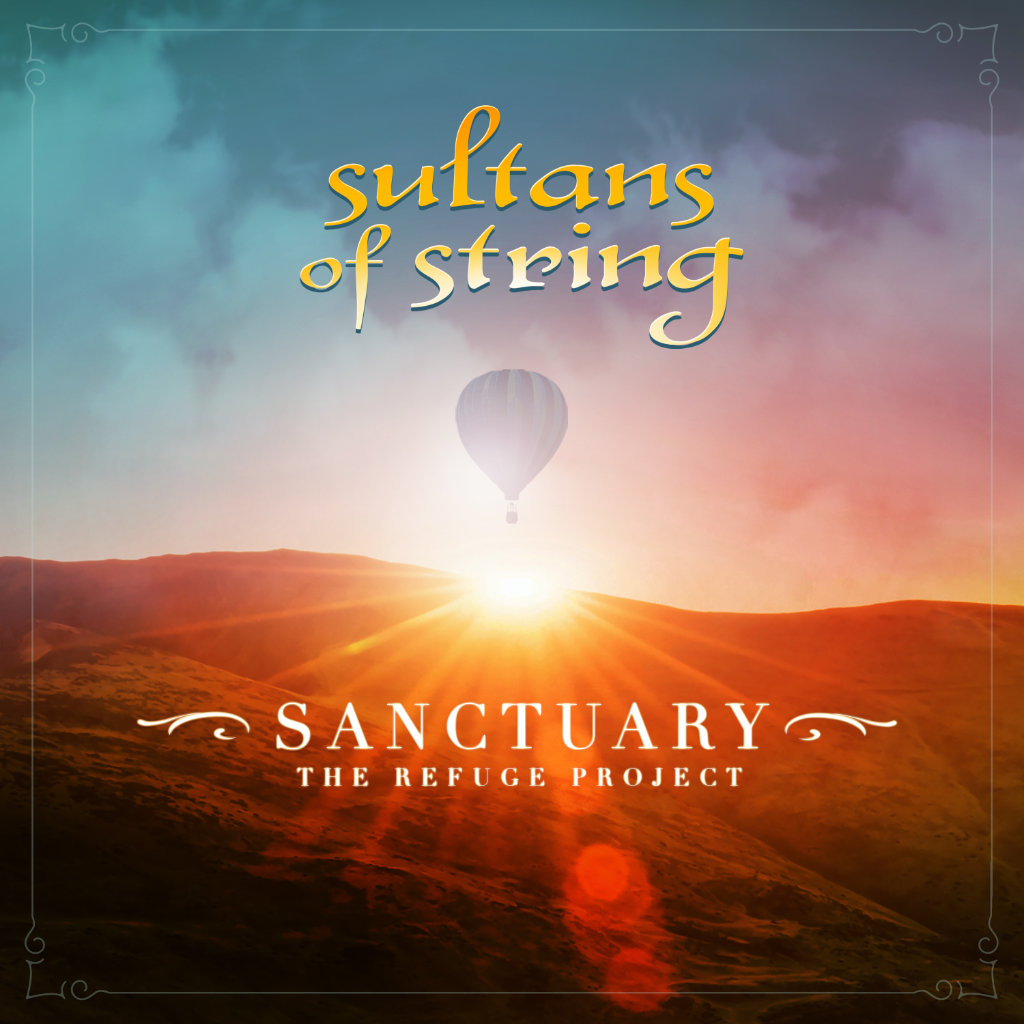 Sanctuary is the second instalment in their Refuge Project. The first, simply entitled Refuge, was heralded as “a fantastic, moving, dreamlike, epic, timely album.” (Ken Micallef–Jazz Times, Stereophile, Downbeat) and won many awards including Producer of the Year at the 2021 Canadian Folk Music Awards for bandleader and violinist Chris McKhool.

“We thought Ariengue Arianga would be the perfect focus track for the album,” says McKhool, “because it is a song that brings this incredible community of musicians together with one voice. Ariengue is an expression in Malagasy, the language of Madagascar, which means, ‘I am wishing you happiness,’ and being able to be together, creating this sound together in the same space again, certainly filled our hearts with joy!”

Donné Roberts wrote the song and plays electric guitar on the track, with lyrics that span decades. He started writing the first verse in 1984 and then finalized it in his new home of Toronto years later.
“I moved to Moscow when I was a small boy, seven years old. My father worked at the Madagascar embassy there. They opened a relationship back then, the Soviet Union and Madagascar. I was inspired by the music all around me and the experience of being displaced at a very young age. I returned to Moscow again later in life at a time when there were no computers around us. There was no internet at that time so it was a time when you could be inspired by different sounds and never hear them again. I returned to Madagascar when I was nineteen years old.”

By the time Donné returned to Madagascar at the age of nineteen, a lot of things had changed. “Things were completely different! The image I had of my home country was pretty different from reality. So, I kept writing this song about wishing someone happiness. It is about separation, for someone has to go somewhere else, wishing them the best of luck on a long way, and a feeling of hope. Who knows, maybe we will meet again.”
Donné finally found his way to Canada’s largest city. “Toronto has a lot of talent, and variety of music – completely different kinds of music, from Japanese to South Asian to Middle Eastern to Russian, Greek, jazz, blues, Brazilian, Cuban, and the thing that fascinated and amazes me is that it is done very well! I go to see bands play, and wow, what great musicians! There is some kind of magical language with music – it doesn’t have any borders or barriers. It is at the level of feeling.”

Joining Donné on this track is Yukiko Tsutsui, who found her way from Japan to Canada, studying and working in BC before moving to Toronto. “Singing Ariengue with Donné is so much fun. Every time we play that song live people get so excited, singing and clapping along.” Says Tsutsui. “The fact that it is in Malagasy is not a barrier, the music is so uplifting and makes people so happy. It is amazing to sing that song with Donné. I feel really blessed.”

“We need this uplifting music, especially this year, and this version is such a gift for people from all over the world to get to sing together and play together. It is so moving. The music has no borders. Everything, the instruments, drums, we can feel the rhythm and the melodies. We feel good, and we feel love, that is the amazing thing about getting together to play music, feeling the strong emotional bond between players and audiences and we are sharing a beautiful moment and that is a very big part of the meaning for me, that people from all over the world can get together and share the music and the moment and love together.”

This ambitious, diverse, inclusive, and passionately political album puts the band face-to-face with a VIP roster of global ‘ambassadors,’ some of whom are recent immigrants and refugees to Canada, as well as important Indigenous voices. All are masters of world music that communicate with each other through the global language of music.

Addressing the struggles of life on Mother Earth has always inspired Toronto-based quintet, Sultans of String. On Sanctuary, Sultans of String bring their unique brand of musical synergy and collaboration to bear on eleven songs that speak to the challenges facing the world’s displaced peoples—their stories, their songs, their persistence and their humanity.

Joined by an international cast, some of whom are recent immigrants to North America, the celebrated quartet immerses themselves in the plight of the international refugee on Refuge, and the humanitarian response that should greet everyone in search of a home.

Bandleader Chris McKhool explains, “The larger Refuge Project is centred around the positive contributions of refugees and new immigrants to Canada. We are bringing in special guests that are newcomers to this land, as well as global talents that have been ambassadors for peace. We wish to celebrate the successes of those who make the journey here and bring their extraordinary talents with them, in this case, music. Each one of us has a remarkable story to tell, and we are excited to share the beauty of these collaborations with you.”

It also includes three stunning new versions of songs off Refuge. These include an astonishingly gorgeous orchestral version of “The Power of the Land” featuring Indigenous performers Duke Redbird and Twin Flames, Turkish mega-pop star Suat Suna singing “Hurricane,” and flamenco dancer and singer Tamar Ilana singing a version of “Asi Soy” that will rip your heart out.

“The true inspiration behind this album is the incredible artists we get to collaborate with,” says McKhool. “We learn so much from these diverse voices, and each one of them is so personally inspiring. As Ahmed Moneka, an artist and refugee from Iraq says, ‘Love is the main reason for a great future,” and we are so privileged to be able to collaborate with so many incredible voices on this project.

And to feel the love.

Sanctuary (CD) and Ariengue Arianga (single) are being released in standard stereo as well as Dolby Atmos.

…plus the regular band!

To our many supporters and fans who pre-purchased CDs to help us create this body of work.

We would like to acknowledge the support of the Canada Council for the Arts Digital Initiatives programme.

We would like to acknowledge the support of FACTOR.